Cavitcleaner continuously observes the technological development for the efficient and safe maritime transport of goods and passengers.

The operating costs of  a ship are certainly influenced by fuel costs.
The efficiency of the propulsion depends on several factors. The submerged parts of the ship (hull, propellers, rudder etc.) are directly influenced by the presence of fouling organisms that attack the surface, causing resistance to motion.  Therefore, in order  to maintain a constant dynamic, fuel consumption and wear of mechanical parts involved in propulsion will increase significantly.
The innovative commercial diver companies, aim to achieve  maintenance and efficiency of transport by means of an innovative cavitational system, keeping the submerged surfaces free from fouling organisms.
Using this cleaning system frequently, Cavitcleaner wants to provide the key to maintaining low costs and the performance of the boats-vessels, as close as possible to those after the launch from the docks.

Cavitcleaner continuously observes the technological development for the efficient and safe maritime transport of goods and passengers by investing in the design of increasingly efficient and environmentally friendly vehicles. The complex nature of the environment means this requires adequate and constant maintenance, and accordingly underwater inspections and maintenance help reduce costs and increase safety.
The maritime transport sector is one of the “cleanest”, but the organisms that flourish in the submerged parts reduce performance, increase fuel consumption and in extreme cases increase corrosion, thus putting at risk not only performance, but above all, safety.

IMO (International Maritime Organization), has already defined the amount of antifouling material to be removed during hull polishing.
Therefore it is likely that international and local restrictions may be introduced to regulate underwater cleaning operations.

The removal of the vegetative mass from submerged surfaces, with the use of brushes/abrasive discs, is prohibited in many European basins.
Technological development and awareness of eco-compatibility has led, since the ‘60’s , to the use of more and more popular anti-fouling paints. These are low in pollutants because they eliminate those metals in their composition, such as arsenic and mercury, so effective in the maintenance of a hull, but very toxic to the marine environment.

The study of biological fouling organisms (algae, crustaceans, molluscs, etc..), has demonstrated that the quantity of organisms which grows to an unprotected hull, borders 150 kg per square meter, in about 6 months of exposure. The figures then soar exponentially when applied to surfaces of vessels of large tonnage. (Surrounded area : 40.000 square meters or 6000 tons of vegetation).
Another aspect related to the presence of organisms, on the parts concerning propulsion and steering stability, regards the increase of up to 40% of resistance to motion, reducing speed and increasing the consumption of fuel from 10% to 20%.

This means higher management costs for the transport industry. Extra consumption directly affects the amount of gas released into the atmosphere, gases precisely considered greenhouse such as CO2, NOX, SOX, which appear to be measurably higher.

All this is to be considered if you are referring to the agreements made by the EU Treaty of Kyoto with the prospects of reducing emissions by 2012.
And ‘therefore it is indisputable that, for maximum performance, a hull should be conventionally or technologically (electrified systems)  protected and free from scale.

Traditional cleaning systems used underwater make use of abrasive pneumatically or hydraulically served brushes, which give effective and inexpensive results.
However the abrasive effect of the brushes used, removes part of the protective paint, with the same dispersion in the environment, and makes the surface more vulnerable to the establishment of organisms.
The same problem has arisen when using jets of water at high pressure (+ 500 bar). This is why the cavitation technology applied by Cavitcleaner is a concrete response both to environmental protection and to resolution of problems for shipowners .

Studies on cavitation fluid have led to the development of new technologies, not only in the military, but especially in the use of cleaners and micro surgery.
In this case it refers to the cavitation generated by ultrasonic frequencies applied in dentistry and the aesthetic and ophthalmic areas.
This physical phenomenon used in macro cleaning, has made possible the construction of a new tool for descaling in the underwater environment, whether in-shore or offshore.
In summary, we have adopted the cavitation system, generated the formation of microbubbles in the flow of sea water (no chemical additives). These are not generated by a rise in temperature, but by a Delta P (pressure difference) which is the difference between flow pressure and steam pressure.
Maintaining this physical instability of the two pressures, at a limited distance from the nozzle (0-8 cm), causes the formed bubbles to collapse, generating a pressure of implosion  five times that of the flow impact.(corrisponding to 800 bar)
The result is that the micro-bubbles detach the different types of organisms with the implosive force only and not because of the impact pressure, like traditional hydrojets do.
This means removing organic material without detaching the support substrate (protective paint ),with an effective cleaning result, in total respect of the environment.
One aspect, not least in importance, refers to the operational safety. When working with low pressures the risk of accidents for the diver is virtually zero, unlike traditional waterjet machines that use extremely high pressure.

The current system of cleaning, considering the low availability and high cost of dry docks, limits the opportunity for operators to do adequate maintenance on their boats/ships.
What  Cavitcleaner promotes is  a complementary method in accordance with current regulations concerning the environment and safety. This maintenance is carried out in that period of transition between one dock and another to ensure that the efficiency of “our” ships meets the expectations of the parameters set by the qualified authorities. 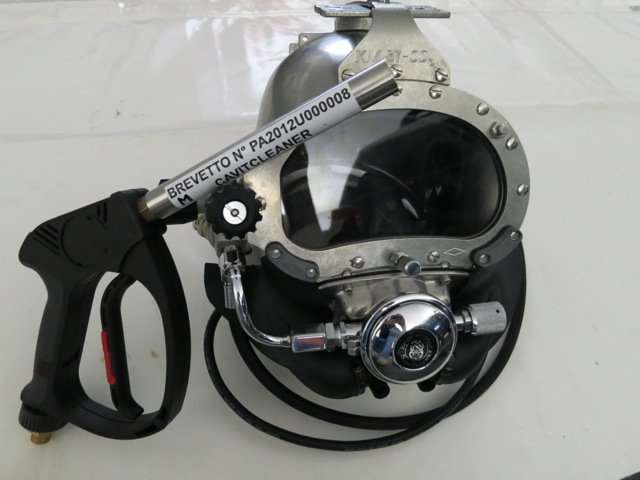 For any commercial questions related to our products please contact us on: cavitcleaner@cavitcleaner.com or +356 79 006 661

This website uses cookies to improve your experience while you navigate through the website. Out of these, the cookies that are categorized as necessary are stored on your browser as they are essential for the working of basic functionalities of the website. We also use third-party cookies that help us analyze and understand how you use this website. These cookies will be stored in your browser only with your consent. You also have the option to opt-out of these cookies. But opting out of some of these cookies may affect your browsing experience.
Necessary Always Enabled
Necessary cookies are absolutely essential for the website to function properly. This category only includes cookies that ensures basic functionalities and security features of the website. These cookies do not store any personal information.
Non-necessary
Any cookies that may not be particularly necessary for the website to function and is used specifically to collect user personal data via analytics, ads, other embedded contents are termed as non-necessary cookies. It is mandatory to procure user consent prior to running these cookies on your website.
SAVE & ACCEPT